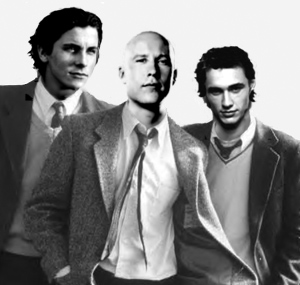 Shadows and Stone:  The World of Excelsior Prep

by Lacey McBain
(Graphic by mkitty_03)


In this universe, Bruce Wayne, Lex Luthor, and Harry Osborn are all classmates at Excelsior Prep, an exclusive all-boys boarding school in New England.  The school accepts boys from Grade 5 to Grade 12, inclusive.  Lex and Bruce start together in Grade 5, around the age of 9, and graduate together eight years later.  Harry joins them in Grade 9, but leaves during his senior year to attend high school back in New York with his friend Peter Parker.  In general, this universe follows Smallville as a baseline for time, so the meteor shower happened in 1989.  Lex had just started attending school there that fall.  Lex's mother dies in 1993 when he is 13 and in Grade 8.
Bruce, Lex, and Harry are all roughly the same age within a year.  Clark Kent is roughly 5 years younger than Lex.  Dick Grayson (Robin) is about 8 years younger than Bruce.  Peter is about 2 years younger than Harry (accelerated student).
Toby (who appears in SV "Stray") is the doctor at the school.  Principal Reynolds (who appears in SV "Redux") is the headmaster at Excelsior.

For everything you need to know about this universe, see This is my Canon (under development).

BEGINNINGS: A series of short fictions that deal with how the characters met or how they made important connections during the early years of Excelsior.  NEW STORY ADDED!!

THE SMALLVILLE STORIES:   Clark and Lex forge a friendship of legend in Smallville.

THE FUTURE IS OURS:  Clark and Lex share a life together in Metropolis.

SIX:  A novel in progress, featuring Clark and Lex, Bruce and Dick, Harry and Peter.  A complete AU blending
the "Shadows and Stone" world with Spiderman.

Smallville and its characters (c) DC Comics, Warner Brothers, Tollin/Robbins and Millar/Gough Ink.
Spider-man, Batman and Robin are owned by other people - Marvel and DC, not me.
This is a non-profit fan site.